Susanne had researched that if we got to our campsite in Angel Creek campground before checkout we wouldn’t lose our reservation and pay a penalty.

Ok, recap of the original plan for context. We were going to spend 3 days at Angel Creek campground in the Humboldt Mountains, which are these amazing mountains just outside of Wells. Nevada. Because the Notch Peak camp spot was been so nice, we stayed an extra day, partly because we knew the weather was going to be pretty suspect at Angel Creek.

We set an alarm for 6 am, so we could get on the road early to make it to Angel Creek in time. Ugh. An alarm on vacation, that is a bummer. We got up had coffee, packed the trailer and go on the road around 7 am.

We crossed into Nevada shortly after we hit highway 50 and realized we gained an hour. Woohoo. No problem with time.

We stopped in Ely to get gas, dump the proceeds from the tanks and fill up with fresh water. We tied off the overflow valve with some twine so we didn’t lose all of our water. 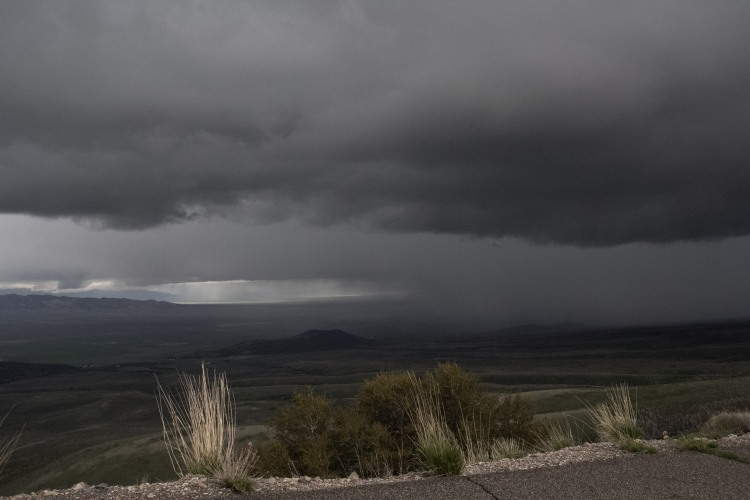 The weather was looking pretty iffy all the way north from Ely to Wells and I was surprised by the amount of snow that was still on the high peaks. My sister and I had climbed Mt. Moriah on May 27 in 2010 and there wasn’t a single patch of snow; this year it was completely covered when we drove by it.

Google told us to turn down a road for the campground. It then tried to take us up some forest service road that really wasn’t a real road. There was a brewery there, and a gate. I regret not stopping in; that might have been a hoot, but it was a bit early in the day. We turned around and ignored the Google lady telling us to turn where there was really no road.

We got to Wells and filled up with gas. Gas has definitely been a bit of a concern for us since the RAM only has a range of about 180 to 190 miles while pulling the trailer. There are definitely those kinds of distances between gas stations in Nevada.  It kind of felt like Patagonia (queue the suspenseful music the foreshadows something…)

We drove up to the campground and found our site and got set up. It was cold and rainy.  After about 20 minutes. the weather cleared a bit so I took the dogs for a walk while Susanne finished setting up the trailer. It was a beautiful area, but there was still a ton of snow on the slopes of the mountains.

We had planned three days here because the hiking was supposed to be spectacular, but it was looking like there wasn’t going to be much hiking because of the snow.

We drove up the narrow, steep windy road to Angel Lake. It was still mostly frozen and there were huge patches of snow. One truck showed up behind us and then left quickly. The dude said “Howdy” to me. We must be in Nevada. A highway patrol guy showed up a bit later and he left quickly too. We threw the Frisbees for the dogs and Ringo got a good Frisbee hiking session in the snow. We drove back to the trailer.

Right when we got there the sky opened up with rain and then this amazing hailstorm. The awning was out and was getting heavy with hail, so we had to bring it in and use a broom to get all of the ice off it.

day to Squaw Creek Reservoir in the Northwest corner of Nevada, because the weather was terrible and there was no hiking to be had.

We had some sausages for dinner and Susanne gave me a serious drubbing in Scrabble. I mean serious. Ouch. Bad way to start the trip.