We enjoyed our six days as Tillicum, although if we were do it again we would have probably only spent 4 and moved to a different beach. That is not to say it wasn’t super wonderful. Plus, Susanne’s plans to buy a house on the coast were pretty much nixed once she got to experience the magnitude of the marine layer and the rain. Our friend Doug tried to claim that “it’s sunny most of the time.” Seriously, this is coastal Oregon, “Sunny most of the time” means I think we saw sun back in 1975 and maybe twice in 1983.

We got up, took the dogs for one last walk on the beach, came back had a quick breakfast and started packing up.

It is official. The trailer is a dirty pig sty full of dirt, sand, dog hair, and leaves. If the trip were any longer we would have to break down and try and clean it up a bit, but we are going to solider on through the grime all the way home. Jason would be appalled.

We drove to Waldsport and dumped. And got coffee. Yeah! We have enough pods to make it home now. The coffee in Waldsport was better than in Yachats. No chocolate covered coffee bean, though.

We took highway 34 to Corvallis. It was a very narrow windy road, but incredibly beautiful and followed along the Alsea River. It would have been a nice place to camp too – put that on the list for future trips.

From Corvallis, we headed up and over the Cascades via highway 20. Yet another very narrow, windy and incredibly beautiful road. It ended up in the Sisters area where we got a great view of the Sisters and Broken Top. There was a big rodeo going on so we got hung up in traffic for about 10 minutes.

We got to Tumalo State Park, set up camp and took the dogs for a walk along the Deschutes River trail. It was a really pleasant temperature around 70 degrees. We came back showered, fed the dogs and tried to get a reservation for dinner; first place was packed, second place was booked. Finally got a reservation at an Asian fusion place that looked good.

We headed out for downtown. Google navigation was really funny – we were on O. B. Reilly Rd. and they way it would pronounce it was: Oh……(long pause)…B (very staccato.. Riley. It just has a funny cadence to it that cracked us up. We kept repeating it every time Google said it. Ok, silly I know, but hey, we thought it was amusing….much more than the sand in the bed.

We were going to start at this cool brewery that we had gone to last time we were in Bend, called Crux Fermentation Project. We got there and it was a zoo, packed, people and dogs everywhere. Darn. They have a nice dog play area, but with our nutheads, it looked a bit too much.

We headed downtown so we could park in the parking garage and keep the dogs cool in the shade. As we were going in to the parking garage, I heard a “thunk.” At first it didn’t occur to me what it was, but then the light bulb went on just before I proceed forward – “high clearance warning!” The bikes were on top!!!

We stopped and then had to get the bikes off the back of the truck. We were blocking the entrance, but everybody was pretty cool about it. Bikes were involved man! And this was Bend. People here know that bikes are important. That is what I do like about smaller towns, people are just so much more chill. If that had been Southern California, I would have had 10 people hurling obscenities at me and honking their car horns.

We managed the bike crisis and got a parking spot. Dogs would be fine. It was nice and cool in the garage.

We headed down to Zydeco, one of the restaurants we couldn’t get a reservation at to have a drink and an app. It’s a happening restaurant. We ordered some Rosé and some BBQ shrimp. They are famous for the shrimp and I can attest that they are quite good.

We finished our wine and decided to go walk around downtown a bit. There was a guy with a horse and a carriage and for some reason it just struck me as a good thing to do. Susanne felt the same way. He took us for a short tour of downtown. He was a chatty chap and the weather was awesome, so it was really fun.

We walked around some more. I have to say I really like Bend.

The river through downtown Bend is beautiful

We headed over to the restaurant, 5 Fusion Asian and Sushi, and got there a bit before our reservation. We ordered some spiced edamame and some seared scallops for starters.

Cool plating (albeit, out of focus) 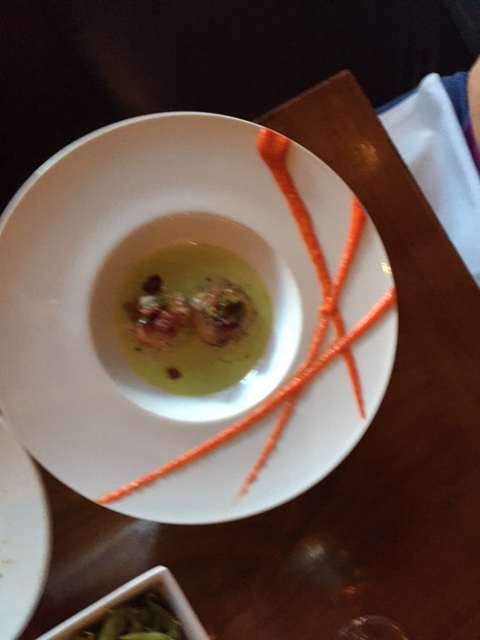 Both were quite good. Susanne ordered a lobster and shrimp curry and I ordered some sushi. The sushi was really good. Susanne’s curry was good too, but it was quite rich and a huge portion.

We headed back to camp, took the dogs out, hung out and went to bed.

All in all, it was a nice, albeit short, visit to Bend.